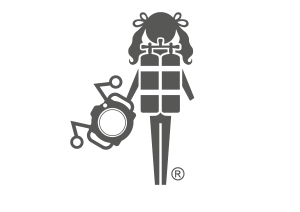 Ben flew to England and met my family for the second time, it was winter and it had been snowing, so after a fun couple of days of tying sledges to the back of the Land Rover up on the moors it was time to fly! He insisted that all my things fit within one large green backpack and ended up pretty much packing for me as everything in my wardrobe suddenly seemed vital and I was failing miserably to pack lightly. I smile fondly on those times remembering all the nerves, anticipation and excitement of the prospect of travelling so far away from home and completely into the unknown. The days when all my scuba gear and clothes fit into one bag are long gone now! 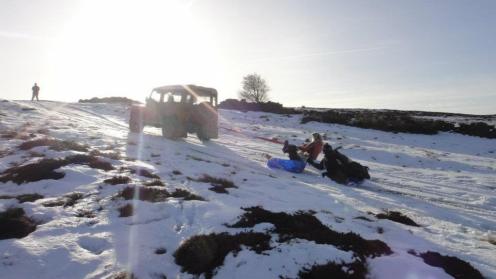 We had a very tiring layover in India and spent hours trying to beat each other at temple run on my Iphone. When I walked out of the airport in Bangkok I could barely breathe, it was my first time in Asia and I had never experienced humidity like that before. With my head in the lonely planet guide we got in a seriously overpriced taxi, I was debating heavily with Ben over where we should spend the first night, he was pulling the typical guy thing of not needing a guidebook that he knew where to go.

We arrived on Koh San road and started trawling around the streets looking for the backpackers accommodation he had been insisting on. He was right about one thing, they definitely existed whether or not they were fit for human habitation even if it was only temporary was highly questionable. There was a huge fish tank next to the reception and on the counter was a jar with pickled bed bugs in it stating to let them know if anyone came across any and they would change the room. Hoping that was all the bed bugs the hostel contained we climbed two flights of stairs up to our 4 euro room, there were no sheets on the mattress on the floor and one ceiling fan. Ceiling fan was perhaps a bit of an overstatement but I was so tired that I settled for the fact it was there in spirit even if it was nothing more than decoration amongst the mass of damp spots on the ceiling. After going in search for some street Thai food I feel asleep with the resounding doubt in my mind whether I could handle the foreseeable future of living out of a bag and slumming it. After a few nights of enduring horrific food poisoning we eventually left Bangkok and got a train to the north. I certainly wasn’t eased into my new life gently but the culture shock was very short lived!

The ride was beautiful, I spent the whole time transfixed to the view out the window of rice paddies and jungle. I had never seen anything like it. Ben being a multilinguist of 9 languages already was already trying to take on Thai using my little language book my mum gave me to speak to the locals. 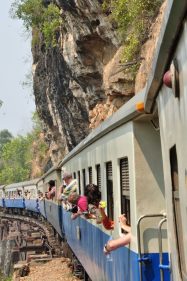 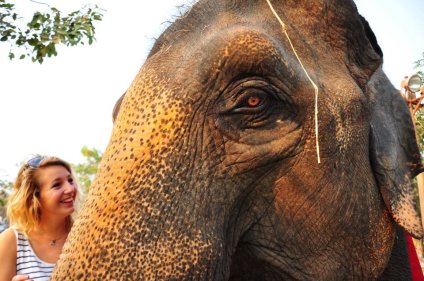 After spending a couple of weeks travelling around the north of Thailand seeing the elephants in Ayutthaya, Monkeys in Lop Buri and travelling on the death railway stopping off at the most beautiful temple I had every seen high in the mountains up hundreds of steps we made our way down to Koh Tao.

I started off handing around a pile of CV’s to dive centres around the island eventually getting a job with Big Blue as a dive master. It wasn’t long before I spotted videographers wandering around and took an interest in what they were doing, before I knew it I was on a video course with Ace Marine images under the direction of Chris Clark and Andy keeler. I took on a videographer role through them for Big Blue, Roctopus and Pheonix dive centres.

The course was a lot of fun, I started off with taking photographs on land so they could get an idea of where I was at with certain photography techniques and then progressed on to underwater training. 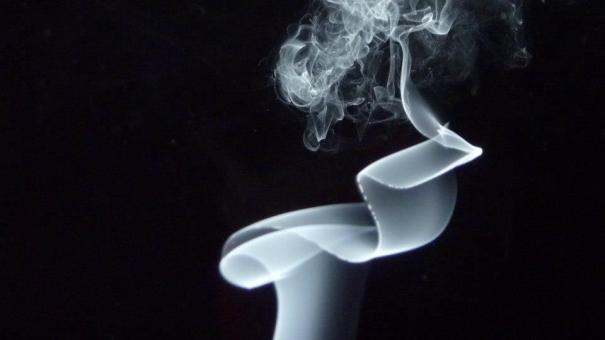 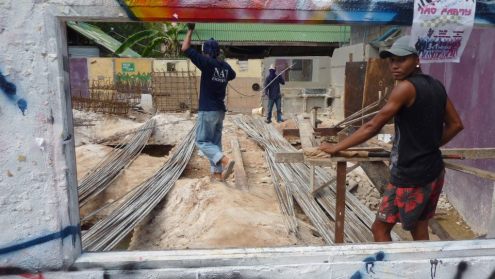 First of all I went out diving with Andy and an underwater camera, we performed buoyancy skills and took some film that we then edited in the studio. I think coming to grips with the editing software was the hardest part of all and it took some time and many you tube tutorials to learn how to add cool effects and edit to the beat of the music to produce exciting films. I feel the training I did over that year on Koh Tao has been a vital foundation to where I find myself today.

My normal daily routine was to get up at about 5:45am to get to the shop for 6:15am and start the morning of filming. I would meet the clients at the Centre and with the help of the instructor, while the boats were being prepared, film a short intro shot. It would involve things like the students running towards the camera and make a  jump, at which point back in the studio I would freeze the shot add some effects and there name etc. The creativity of these introductions normally fell down to how enthusiastic the instructor was. I still remember very clearly my first independent job where the instructor went to the kitchen and came back with white bread flour. He quickly briefed his students on the little role play told me to start filming and pretended to be asleep, the students came in as if they had arrived for diving and went over to wake him up. He rose out of his pretend sleep appearing very groggy, signalled to the students to wait and I followed him over to the table with the small zip tied bag of flower at which point he tipped it over the table divided it into perfect lines and rubbed his big bearded face in it and turned to the camera to signal he was ready to go diving! … Welcome to Koh Tao!

There was some beautiful marine life off the island. I had the very rare opportunity to encounter my first Whale shark and Bull shark at the same time! It was on a dive to Sail Rock which is a circular pinnacle an hour or so boat ride away from Koh Tao. I was filming an advanced course which was rare but also meant we got to go to 25m which was the base of the pinnacle. There was quite a heavy thermocline and a huge school of fish. The group stopped for a while to observe it and all of a sudden the school shot out of the thermocline followed by a rather large Bull shark head! Unfortunately I didn’t have my camera on and was so in shock I just stared gaping at it whilst everyone else very quickly backed up against the pinnacle. Once everyone collected themselves we ascended slightly to get a view over the thermocline where we could see three fins cutting through it, as I was lifting my camera to start shooting something caught my eye. I looked straight forward and a 3m Whale shark was heading right for me! for a moment my brain turned to porridge and I was completely in awe and torn between which I should film! As I was on a level with the whale shark I opted for that and got a lovely shot which I later used in my showreel.

It was a very fun place to live! There definitely was never a dull moment on Koh Tao, be it the diving or the relentless parties every night of the week and it was all combined with some great people to experience it all with.